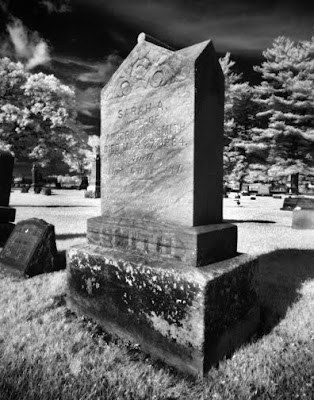 Edgar Allan Poe (1809-1849) himself like many others of his time feared being buried alive, which inspired the author to write one of his greatest short stories in 1850, “The Premature Burial”.

“Fearful indeed the suspicion–but more fearful the doom! It may be asserted, without hesitation, that no event is so terribly well adapted to inspire the supremeness of bodily and of mental distress, as is burial before death”.

"I was lost in reveries of death, and the idea of premature burial held continual possession of my brain. The ghastly danger to which I was subjected haunted me day and night. In the former, the torture of meditation was excessive–in the latter, supreme. When the grim Darkness overspread the Earth, then, with every horror of thought, I shook–shook as the quivering plumes upon the hearse”.

On , The Pardeeville Crank newspaper reported a gruesome discovery at , which is next to the Rosedale Presbyterian Church a few miles east of Pardeeville. The grave of Julia Sarah Smith daughter-in-law of John Smith was opened for the purpose of removing the remains to an adjacent lot. Upon opening the coffin, it was found that she had been buried while in a trance, she must have come to after being interred. There where signs she had partly turned over and the right hand was drawn up the face and the fingers indicated having been bitten in agony of finding herself interred alive. She had been buried thirteen years.

There is no doubt the suffering that many have experienced being buried alive. The strain of mind that the victim surely must possess laying in complete darkness with muffled cries of agonized “help” being unheeded. Many have been known to have lain in a trance for the period of six weeks and then revived.

The fear of being buried alive was so real that it led many inventors to find a variety of ways to allow the interred to signal up to the service that they are still alive and needed to be rescued.

In 1897 Count Karnice-Karnicki of Belgium patented a rescue device, which mechanically detected chest movements to trigger a flag, lamp, bell, and fresh air. Along similar lines, in Great Britain various systems were developed to save those buried alive, including breakable glass panels in the coffin lid and pulley systems which would raise flags on the surface. 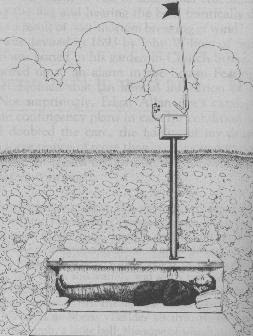 Posted by Phantasmagoria Photography at 9:57 PM No comments:

Hello to both new and faithful blog followers.

Please be sure to occasionally drift over to our Facebook page from time to time. We are prone to frequent print giveaways as we gain more and more followers. We'd love to see you there now and again. ~C&A
Posted by Anna at 10:56 PM No comments: