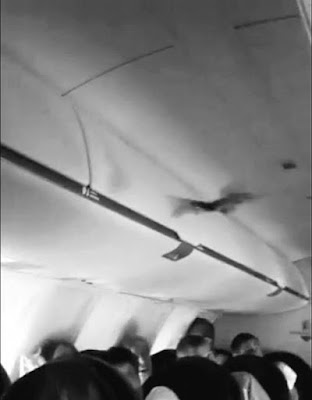 (Story form Wisconsin State Journal)
A problem passenger fitting a new profile — winged, blind and potentially rabid — caused a shriek-out moment for 49 passengers on a Madison flight bound for Atlanta early Friday morning before being sequestered in the lavatory, drawing cheers but causing the plane to turn around.

The Atlantic Southeast Airlines flight departed Madison at 6:45 a.m. At 7:08 a.m., pilots notified air traffic controllers that a winged animal was on board, saying the flight would reverse course and land back in Madison, said airport spokesman Brent McHenry.
A video posted to CNN's website by an unnamed Kansas City man shows the creature, which appears to be a bat, making at least five trips up and down the cabin, encountering plenty of turbulence as screaming passengers swatted at it with newspapers.
The end came when a man at the back of the plane shooed it into the only lavatory and quickly shut the door. Other passengers cheered. One gave the thumbs-up.
When the plane landed back in Madison, the human passengers deplaned and airport staff got on to help root out the critter, McHenry said. Initial batfinding efforts failed but eventually the elusive flyer took flight — through the plane and out the door into the terminal, where about three dozen people were seated, McHenry said.
A maintenance staffer coaxed it out the terminal door and back into the open air, he said.
The plane was again cleared for takeoff, said airline spokesman Jarek Beem, and the passengers reboarded after a delay of a few hours, he said.
No injuries were reported.
Posted by Phantasmagoria Photography at 10:35 AM No comments:

We just finished our new website! Feel free to stop by and have a look and tell us what you you think.
http://caphotostudio.com
Posted by Phantasmagoria Photography at 9:19 PM No comments: