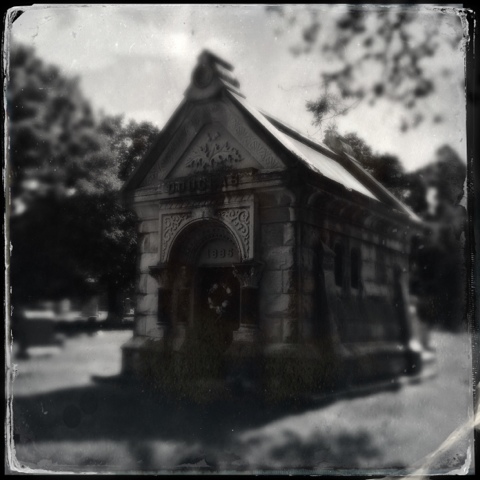 The drive home today was much better then expected. The weather was cool and partly cloudy and traffic was fairly decent. During my ride home it gave me a chance to reflect over the past week.
Yesterday I shot the last two locations for this small trip. Originally there was three but one didn't work out the way I hoped. Both where cemeteries and both where named Oak Hill Cemetery but in two different cities. Thankfully they weren't to far apart.
During my shooting I realized the way I shoot is different from my days as a newspaper photographer. The way I shot  assignments was, I allowed the event to dictate how I photographed it. But with my project I have a general idea how it should look and I try to capture every angle I can that will fit that idea. With the way I photograph for my project I'm free to capture everything I feel and anything that catches my eye. It's a very free and relaxing way to do my job.
By the afternoon most of my shooting was completed and this allowed me some down time to spend time with old friends and edit some photos.
This trip has reinspired me and renewed my desire to shoot more often. I'm hoping in the next few months I plan on a few day trips to add more stories and photos to my archives.
One piece of advice that has always stuck with me is if you want to make art they you must make the time for it. It's easy to say I want to write that novel but it won't get made till you stop making excuses and just sit down and do it.
Posted by Phantasmagoria Photography at 9:33 PM No comments: 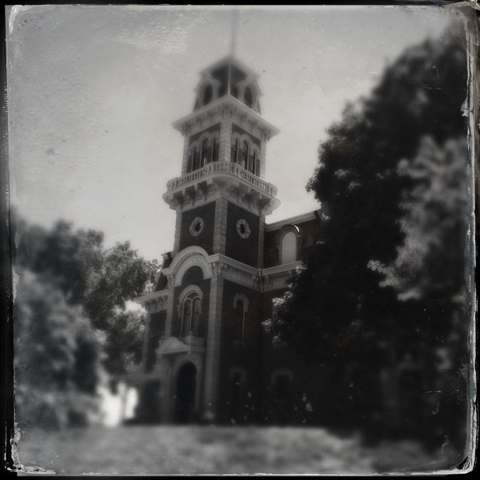 Today I traveled to Des Moines to shoot photos of the stunning Terrace Hall. This house is gorgeous! The Second Empire architecture defiantly gives it a presence and what many may consider a classic haunted house look.
This house was my first stop but I was frustrated by the lack of clouds during that time of day and to may people moving around. After I got some images I went and shot my second house, looked through a large cemetery and then grabbed lunch. While looking for a place to eat I noticed the clouds began to move in so I decided  to return and shoot some more images. I'm glad I did because the images where much better and no people around.
The hardest part about doing this project is figuring out what the best time is to shoot these places. During season of operation or off season, morning or afternoon, spring, summer or fall. It can be very frustrating when you look forward  to shooting a place and to learn that it's under construction when you get there.
Posted by Phantasmagoria Photography at 11:06 PM No comments: 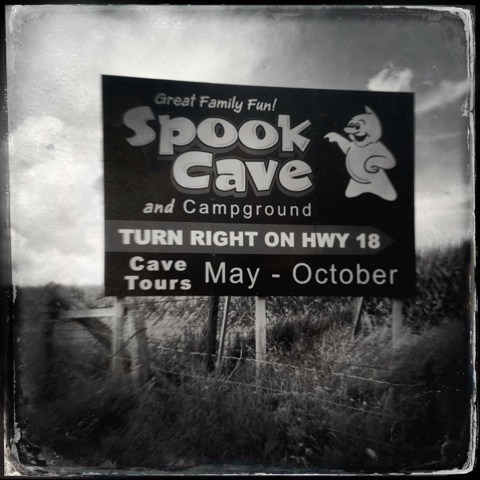 "Is the Heaven?" "No it's Iowa" what a thrill to be on the road again and shooting. It's been a long day and I just stopped for the first meal of the day. I have another two hour drive ahead of me to the hotel.
I've been taking the back roads and have see some wonderful country. Iowa is hiller in the north east then was expecting.
He are some images I've taken so far along my trip. These images are more work prints or experimental at best. When I get home and have time to edit I will post each place I've visited accompanied with the story. 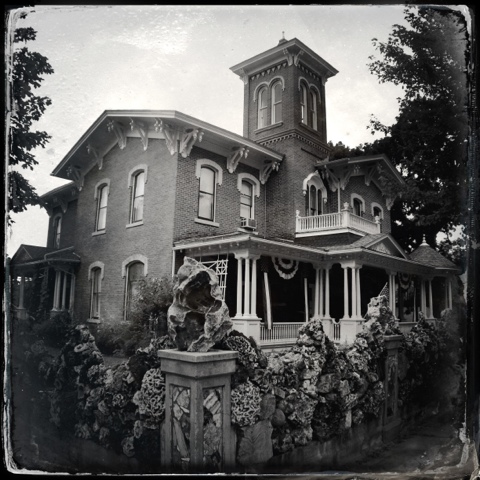 It’s wonderful to know in a few days I will be on my way to let my dark side run rampant and photograph some more haunted places. The state I chose was Iowa. It has some wonderful mansions and cemeteries and I’m also looking forward to catching up with some friends while I’m down there. I will be spending four days traveling to as many different locations as I can. The weather should be in my favor with high 70s-low 80s. Maybe a storm or two!

This will be the first major trip I’ve taken for this project in a few years. I’m looking forward to visiting these places with a renewed sense love and determination. Allowing very little distractions and leaving the stress behind me I want to concentrate on my subjects with the camera and allow myself to be immersed in the atmosphere of the place. Taking in the sights, sounds, feel and smell of each place.

During my journey which begins this Wednesday (July 24th) I will blog as often as I can posting photos and and info as I go. Thanks for the visit.

Posted by Phantasmagoria Photography at 7:37 PM No comments:

Conquering Cancer and Life’s other Snares 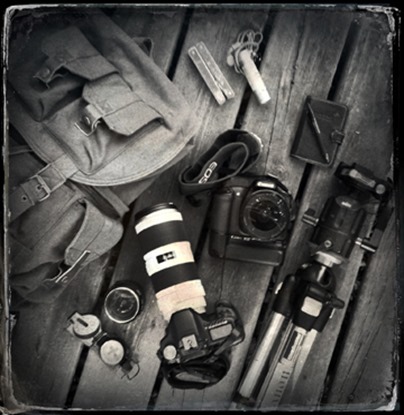 Needless to say the past two years have been a personal Hell for me. Last year I went through a divorce which left me depressed, near homeless, I lost a ton of weight, I lost my day job, I had to adjust to life as a single dad and I had a few financial issues as well. At the beginning of this year I was sick for about two months with a stubborn sinus infection and daily migraines. During treatment for that they discovered I have Kidney cancer and I went in for surgery for that about a month ago. After a seven hour surgery they got all the cancer and I’ve healed nicely and I’m ready to do what I love to do most which is explore.
At the end of this month I plan exploring some haunted mansions and cemeteries. This trip is much needed and I’m also looking forward to seeing some friends I haven’t seen in a very long time. This is the biggest trip I’ve taken in two years for my project. It feels so wonderful to plan and prepare for this trip. I have a few new ways of shooting I want to try. So, during my trip which will be between July 24th-28th. I plan on posting to my blog. The posts will also automatically appear on my Facebook page.
If anyone knows me I LOVE my iPhone and using the blogger app is perfect for what I want to do during my travels. I have various other Apps that I use and I’m looking forward to putting my photography, computer and navigation skills to work again.
I’ve felt so guilty for not posting more and shooting more places but you take what life gives you and you roll with the punches. A good friend of mine told me once that “you must always have something to look forward to” and that is so right. It feels great to look forward to this trip and I’m thankfully I’m still here to continue my work.
Posted by Phantasmagoria Photography at 8:21 PM No comments: 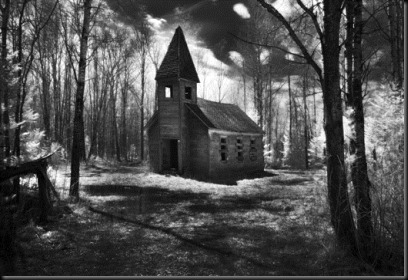 For months I’ve been having a bad case of cabin fever. I’ve wanted desperately to get out and shoot some pictures. Since the winter weather has released its icy grip from my home allowing the snow to retreat to make way for the spring growth. I decided to shoot an abandoned building a friend of mine told me about.
I found the old church located at the end of a dead end road surrounded by trees. Water from the melting snow pooled in places along the front and sides of the structure. I was amazed how sturdy the church remained and years of neglect. From what I could see I loved how simple the architecture was and I wondered how it may have looked in its prime. It was truly wonderful to walk around photographing the old building, being in the moment with no distractions, taking in my surroundings.
I’ve been planning on doing a much more extended trip to a few haunted places this year but due to some medical issues I’ve had recently the date when I take my trip will be dependent on my recovery in the next few months. When I do make the trip I will defiantly blog about. Till then I hope you enjoy my recent photos. 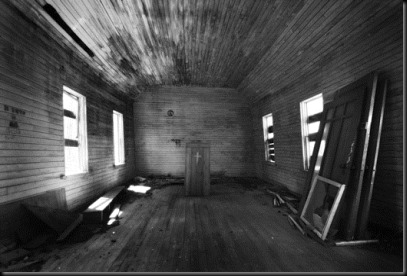 Posted by Phantasmagoria Photography at 12:33 PM No comments: