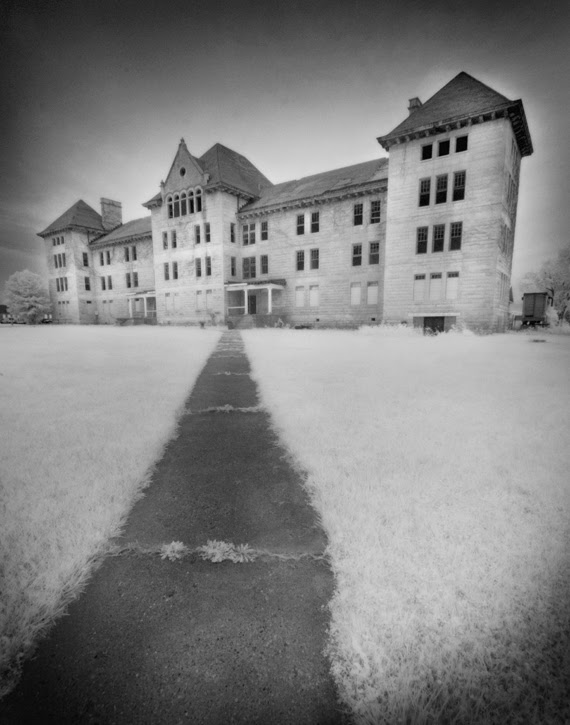 Located west of Peoria in the small town of Bartonville, the Illinois Asylum for the Incurable Insane was originally built in 1897 in the style of a medieval castle, but was never used. Legend says the building was constructed on top of an abandoned coal mine that compromised the integrity of the building. The official explanation that was given was that having a castle like structure didn't fit the modern sensibilities of treating the "insane," and they wanted to use a cottage like design instead of having one large building. The building was demolished and rebuilt, and by 1902, the Asylum reopened and began treatment of the "incurably insane" under the direction of Dr. George Zeller.
Well respected, Dr. Zeller treated his patients using therapeutic methods for "curing the insane," instead of more experimental treatments that were popular at the time, like electro-shock therapy, lobotomies and hydro-shock therapy. He also used newspapers to educate the public about mental illness and offered training programs to nursing students. In the 1920s, Dr. Zeller published a book Befriending the Bereft, The Autobiography of George Zeller, which chronicled his daily experiences at the asylum, many of them strange and mysterious.
One such popular story took place in the asylum's nearby cemetery. Funerals were held for those whose bodies were never claimed by the family. The staff didn't know most of the patients, but out of respect, they would gather around as the coffin was lowered into a grave that was marked only by a numbered headstone. A gravedigger named Manuel A. Bookbinder often stood next to a large elm tree as the service took place. Sobbing and moaning loudly with his hat removed, Bookbinder attended every service and always displayed his mournful cries even though he never knew most of those who were being buried. 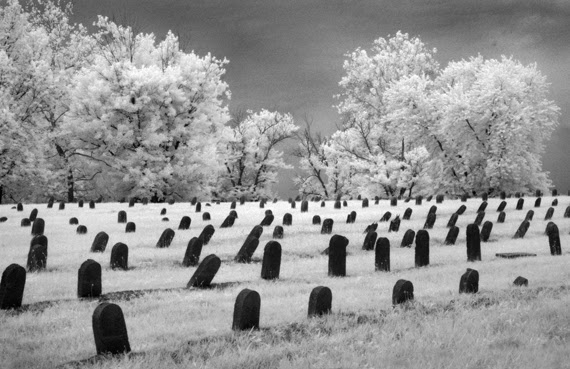 When Bookbinder finally passed, a service was held, and as his coffin was being lowered into his grave, sobbing and moaning was allegedly heard by the staff coming from the elm where he always stood. As they turned to see where the noise was coming from, they allegedly saw Bookbinder standing there, sobbing and moaning loudly as he always did. Shocked by the experience, many of the staff ran from the site; Dr. Zeller ordered his men to remove the lid of the coffin to see if it was empty, but when they did, Bookbinder's body was still in his coffin. When they turned back towards the elm, the figure reportedly vanished.
Within a few days, the elm tree that Bookbinder stood next to began to wither. Attempts were made to save the tree, but as it finally died, Dr. Zeller ordered the elm to be removed. As the ax man swung into the tree, sobbing and moaning could reportedly be heard. Unnerved by the experience, the ax man left and when another attempt was made to remove the tree, this time by fire. Once again, as a fire was started at the base of the tree, sobbing and moaning was reportedly heard. All attempts to remove the tree where halted from then on.
By the 1950s the asylum reached its peak with a population of 2,800. Then, over the course twenty years, the asylum's population began to decline, and eventually closed its doors for good in 1972. Many of the thirty three buildings were abandoned, and most were demolished; only the hospital buildings remain, and attempts to renovate those structures has been difficult.
Paranormal investigators over the years have reported seeing apparitions, shadow people, disembodied voices and doors that open and close by themselves. It's uncertain who would haunt the building -- maybe the patients, the staff or even Bookbinder himself? Maybe the patients have never left because the time they stayed there were of good memories.
When I visited the asylum one humid summer day, I definitely felt intimidated by the size of the structure. Under a gloomy sky the gray imposing building stood out from the surrounding neighborhood, void of any trees; it felt like nature itself was keeping it distance. The black windows stared down on me as I walked around taking my pictures trying to gain my courage to get closer to the building, to maybe find a window low enough to see inside. Unfortunately, at the time I was unable to see inside, but I'm hopeful I will soon return and contact the owner to get a chance to explore the inside of such a historic and legendary building.
Posted by Phantasmagoria Photography at 2:10 PM No comments:

I woke up to hear knocking on glass. At first, I thought it was the window until I heard it come from the mirror again.
Therealhatman
The last thing I saw was my alarm clock flashing 12:07 before she pushed her long rotting nails through my chest, her other hand muffling my screams. I sat bolt upright, relieved it was only a dream, but as I saw my alarm clock read 12:06, I heard my closet door creak open.
Jmperson

Growing up with cats and dogs, I got used to the sounds of scratching at my door while I slept. Now that I live alone, it is much more unsettling.
Miami_Metro

In all of the time that I've lived alone in this house, I swear to God I've closed more doors than I've opened.
EvilSteveDave

A girl heard her mom yell her name from downstairs, so she got up and started to head down. As she got to the stairs, her mom pulled her into her room and said "I heard that, too."
Drrd777
Posted by Phantasmagoria Photography at 11:03 AM No comments: