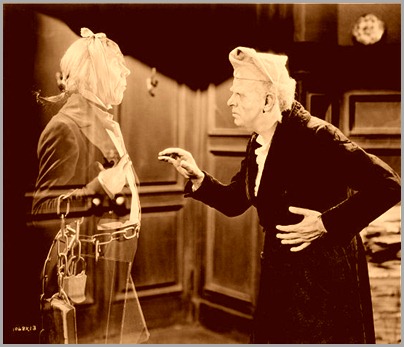 The Christmas traditions we keep are mostly personal. The type of food we make or eat, the gifts we give or receive they way we decorate our homes. Many of the general traditions we observe come from the Victorian era, the Christmas tree, stockings, ornaments, fruitcake and a long list of other traditions. But one I’ve noticed that hasn't been kept is the telling or ghost stories. I began to wonder why and started to think of the reasons why they did in the first place and why don’t we now.

I then came across this story that sort of explains a bit of what I was thinking.

While reading a list of all the modern Christmas traditions that were either borrowed from pagan winter festivals or invented by the English during the mid-19th century, it's remarkable to see how little Christmas has changed over the past 160 years.

In the last few decades, though, perhaps one of the most interesting Victorian Christmas traditions has been almost completely lost from memory.

“Whenever five or six English-speaking people meet round a fire on Christmas Eve, they start telling each other ghost stories,” wrote British humorist Jerome K. Jerome as part of his introduction to an anthology of Christmas ghost stories titled “Told After Supper“ in 1891. “Nothing satisfies us on Christmas Eve but to hear each other tell authentic anecdotes about specters.”

The practice of gathering around the fire on Christmas Eve to tell ghost stories was as much a part of Christmas for the Victorian English as Santa Claus is for us.

Traces of this now-forgotten tradition occasionally appear in noticeable places at Christmastime, although their significance is generally overlooked.

One verse of Andy Williams’ classic Christmas song “It’s the Most Wonderful Time of the Year,” for instance, clearly says, “There’ll be scary ghost stories and tales of the glories of Christmases long, long ago.”

The most obvious example of how Victorian ghost stories have persisted to some degree in modern Christmas celebrations, however, is of course Charles Dickens’ own “ghostly little story” (as he calls it in the introduction) “A Christmas Carol.”

Some argue that Dickens’ Christmas ghost story single-handedly saved the winter holiday from dying out during the Industrial Revolution. At a time when England was no longer celebrating Christmas, Dickens reintroduced many centuries-old traditions with his instant holiday classic. It has become so much a part of Christmas in its various film adaptations and theatrical versions that people don't even wonder why Dickens chose, of all things, four spectral visitors to bring about Ebenezer Scrooge’s transformation from miserly curmudgeon to selfless philanthropist.

Isn’t there something inherently unseasonal about ghosts? Don’t ghosts belong with all the ghouls and goblins of Halloween? Not so for Victorian England.

“There must be something ghostly in the air of Christmas — something about the close, muggy atmosphere that draws up the ghosts, like the dampness of the summer rains brings out the frogs and snails… For ghost stories to be told on any other evening than the evening of the twenty-fourth of December would be impossible in English society as at present regulated,” Jerome wrote.

He continues, “So what is it about Christmas that goes so well with ghosts? Such a question inevitably brings up the issue of why we celebrate Christmas in December at all.”

As Lord Protector of England during the mid-17th century, Puritan leader Oliver Cromwell was perhaps not entirely without justification when he tried to abolish the celebration of Christmas. As he argued, nowhere in the Bible does it tell Christians to celebrate Christ’s birth on the 25th of December. Nor, in fact, does it mention any “holy day” other than the Lord’s Sabbath.

On top of that, the 25th of December was not an arbitrary choice for early Christians. Rather, it was selected because of its connection with pagan festivals like Yule and Sol Invictus (the birthday of the Unconquered Sun), both of which commemorated the winter solstice or the longest night of the year.

These festivals celebrated the death of light and its subsequent rebirth the following day. It was for the obvious symbolic connotations that early Christians adopted dates significant to pagan Romans and Northern Europeans.

In addition to being the longest night of the year, however, winter solstice was also traditionally held to be the most haunted due to its association with the death of the sun and light. It was the one night of the year when the barrier between the worlds of the living and the deceased was thinnest. On Christmas Eve, ghosts could walk the earth and finish unsettled business, as exemplified by the apparition of Marley in Charles Dickens' Christmas masterpiece.

In short, the Victorian Christmas celebration, which drew heavily on pagan symbols like yule logs, holly berries and Father Christmas himself, also embraced the winter holiday’s associations with the supernatural to create one of its most popular annual traditions.

Unfortunately, of all the traditions and rituals that have survived through the generations, the Victorian custom of recounting blood-curdling ghost stories with friends and family around the fire on Christmas Eve has been almost completely forgotten.

So if you decide to watch "The Others" or "The Sixth Sense" this Christmas Eve instead of “How the Grinch Stole Christmas!” or “Elf," you'll be keeping alive a Victorian Christmas Eve tradition.

For the Deseret News

The Victorians where very aware of their mortality they loved Spiritualism and often conducted séances or searched out mediums in hopes of communicating with the dead.  They honored loved ones recently past by photographing them and taking clips of their hair to produce hair woven lockets, bracelets and necklaces. It would seem fitting to tell a ghost story or two during the bleak month of December.

Todays sensibilities we focus more on getting the right gift, spending time with friends and family, food, shopping, church, decorating and trying to recapture the love and magic of Christmas from our youth. We no longer have time to dwell thinking about the supernatural. Ghost stories are a much apart of the season as in any other time of the year. They are perfect for the season because what a better way to demonstrate the moral tale then through a ghost story.