800-year-old Remains of a Witch Discovered

Macabre: Archaelogists believe this is the skeleton of a woman who was thought to be a witch
These are the 800 year old remains of what archaeologists believe was a witch from the Middle Ages after seven nails were found driven through her jaw bone.
The grim discovery was made during a dig on what is thought to be a 'witches graveyard' after another woman's skeleton was found surrounded by 17 dice - a game which women were forbidden from playing 800 years ago.
Experts say they believe the women are aged around 25 - 30 years old and were found buried in a simple shallow grave in the ground with no coffin or shroud.
The macabre remains were found during a dig close to the sea at Piombino near Lucca in Italy's Tuscany region and the woman had seven nails through her jaw as well as another 13 nails surrounding her skeleton.
Archaeologist Alfonso Forgione, from L'Aquila University, who is leading the dig, is convinced that the women were suspected witches because of the circumstances in which they were buried.
He said: 'It's a very unusual discovery and at the same time fascinating. I have never seen anything like this before. I'm convinced because of the nails found in the jaw and around the skeleton the woman was a witch.
'She was buried in bare earth, not in a coffin and she had no shroud around her either, intriguingly other nails were hammered around her to pin down her clothes.
'This indicates to me that it was an attempt to make sure the woman even though she was dead did not rise from the dead and unnerve the locals who were no doubt convinced she was a witch with evil powers.
'The second skeleton we have found was buried in a similar fashion but this time we found 17 dice around her - 17 is an unlucky number in Italy and also dice was a game that women were forbidden to play.
'The way the bodies were buried would seem to indicate some form of exorcist ritual and the remains will be examined to see if we can establish a cause of death for them.'
One puzzle that the archaeologists have been unable to explain is why the women if they were evil witches were buried in consecrated ground as the area is the site of an 800 year old church.
He said: 'The only possible explanation is that perhaps both women came from influential families and were not peasant class and so because of their class and connections were able to secure burial in consecrated Christian ground.'
The team is trying to find the burial place of the St Cerbonius, a bishop who died more than 1,500 years ago and who is the local patron saint of the area.
More...'We want to celebrate her 21st birthday¿ three years too late': Father of Amanda Knox speaks out on eve of appeal verdictThe black flag that told Scott he had lost: Pencil sketches of explorer¿s ill-fated Antarctic expedition go on display
The team is trying to find the burial place of the St Cerbonius, a bishop who died more than 1,500 years ago and who is the local patron saint of the area.
Pictures traditionally show him having his feet licked by a bear after legend has it the animal refused to eat him after he was condemned to death for sheltering Roman soldiers by the Barbarians who had invaded Tuscany.
Two years ago a Medieval woman's skull was found near Venice with a stone driven through its mouth - which experts said was the traditional way of dealing with vampires and preventing them from rising from the dead. Number's up: The skeletons were found with dice, which women were not allowed to play Dig: Skeletons scattered around the site in Tuscany
It comes a day after the skeleton of a Maya Queen - with her head mysteriously placed between two bowls - was found among treasures in a 2,000-year-old rodent-infested tomb.
Priceless jade gorgets, beads, and ceremonial knives were also discovered in the cavern - which was found underneath a younger 1,300-year-old tomb which also contained a body - in the Guatemalan ruins of Nakum.
The two royal burials are the first to be discovered at the site, which was once a densely packed Maya centre. Piombino in Italy: Where the graves were found
Posted by Phantasmagoria Photography at 8:43 PM No comments: 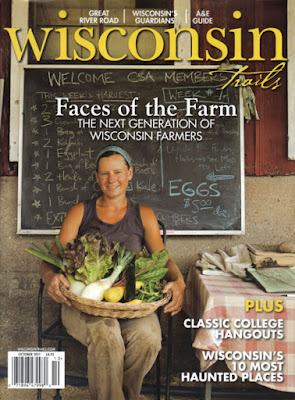 We are excited to finally announce news we've been waiting to share: Phantasmagoria Photography has a few photos PUBLISHED! Check out Wisconsin Trails magazine September/October page 25,with text by paranormal researcher and author for Unexplained Research Chad Lewis. 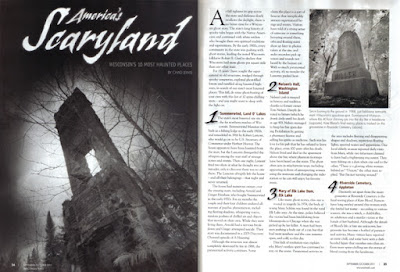 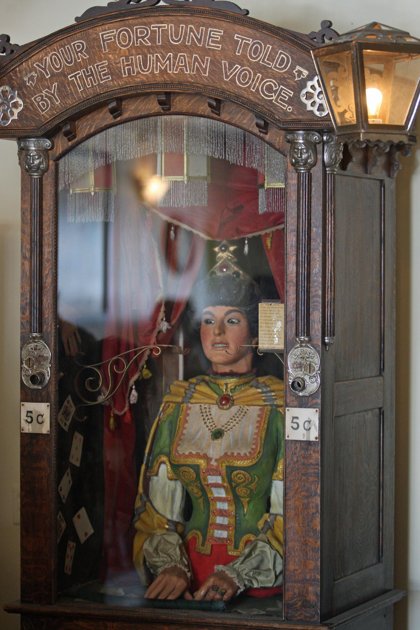 VIRGINIA CITY, Mont. (AP) — The Gypsy sat for decades in a restaurant amid the Old West kitsch that fills this former gold rush town, her unblinking gaze greeting the tourists who shuffled in from the creaking wooden sidewalk outside.

Some mistook her for Zoltar, the fortune-telling machine featured in the Tom Hanks movie "Big." Others took one look at those piercing eyes and got the heebie-jeebies so bad they couldn't get away fast enough.
But until a few years ago, nobody, not even her owner, knew the nonfunctioning machine gathering dust in Bob's Place was an undiscovered treasure sitting in plain sight in this ghost town-turned-themed tourist attraction.
The 100-year-old fortune teller was an extremely rare find. Instead of dispensing a card like Zoltar, the Gypsy would actually speak your fortune from a hidden record player. When you dropped a nickel in the slot, her eyes would flash, her teeth would chatter and her voice would come floating from a tube extending out of the eight-foot-tall box.
Word got out when the Montana Heritage Commission began restoring the Gypsy more than five years ago, and collectors realized the machine was one of two or three "verbal" fortune tellers left in the world.
One of those collectors, magician David Copperfield, said he thinks she is even rarer than that.
"I think it's only one of one," Copperfield said in a recent telephone interview with The Associated Press.
Copperfield wanted the Gypsy to be the crown jewel in his collection of turn-of the century penny arcade games. It would occupy a place of pride among the magician's mechanized Yacht Race, Temple of Mystery and various machines that tested a person's strength.
Copperfield acknowledged approaching the curators about buying the Gypsy a few years ago but declined to say what he offered. Janna Norby, the Montana Heritage Commission curator who received the call from Copperfield's assistant, said it was in the ballpark of $2 million, along with a proposal to replace it with another fortune-telling machine. On top of that, he pledged to promote Virginia City in advertisements.
But Heritage commission curators, representing the Gypsy's owner — the state of Montana — rejected the idea, saying cashing in on this piece of history would be akin to selling their soul.
"If we start selling our collection for money, what do we have?" said Norby, the commission's former curator of collections.
The commission's acting director, Marilyn Ross echoed Norby's sentiments: "That is not something we would ever consider, selling off these antiques."
That dismissal has set collectors grumbling. Theo Holstein, a California collector and renovator of such machines, said he thinks the Gypsy is wasted in Virginia City and should be placed in a private collection for proper care. He said he is trying to gather investors to make a $3 million bid that would top Copperfield's offer.
"They don't have any idea what they have. It's like they have the world's best diamond and they just pulled it out of their mineshaft," Holstein said. "It's good that it's there and it survived, but now it really needs to be part of the world."
Holstein said he wouldn't be surprised in the machine ultimately sold for $10 million or more. Copperfield also said he is still interested in purchasing it.
That could put pressure on the state, which, like the rest of the nation, is facing hard fiscal times. Montana's budget is in the black, but keeping the effects of the recession at arm's length has meant deep budget cuts.
Those cuts have hit the Montana Heritage Commission particularly hard. Just weeks after Norby spoke to the AP, her position and three others were eliminated as part of a larger reorganization to cut $400,000 from the commission's budget, Ross said.
The state agency that oversees the commission, meanwhile, is not so quick to reject the idea of selling the Gypsy. Department of Commerce deputy director Andrew Poole said he has not seen any offers in writing, and if one were made, it would go through a bid process that includes the scrutiny of the commission and input from the public.
The state inherited the Gypsy in 1998 when it paid $6.5 million to buy nearly 250 buildings and their contents in Virginia City and nearby Nevada City from the son of Charles Bovey. The Montana collector spent years buying up the buildings to preserve the two crumbling ghost towns and he stocked them with his ever-growing collection of antique games, music machines and oddities.
Bill Peterson, the heritage commission's former curator of interpretation, said the collection includes hundreds of thousands of items, so many that curators are still discovering them.
The Gypsy was made sometime around 1906 by the Mills Novelty Co. In restoring her, the curators either replaced or repaired frayed, worn or broken parts with exact replicas. When they couldn't find replicas or period materials, they didn't replace the parts.
"We don't want to make her anything that she wasn't," Norby said.
In 2008, they installed the Gypsy as the centerpiece of the Gypsy Arcade amid the ancient wooden buildings of Virginia City's main street. Calliope music spills out into the street, beckoning the tens of thousands of visitors to enter and view the stereoscopes, shock tests, tests of strength, fortune telling machines and love letter machines. The Gypsy presides over the menagerie in the rear, ropes keeping visitors at a distance.
All of that care in restoring, preserving and displaying the Gypsy causes state curators to reject Holstein's argument that the machine should be removed from Virginia City and placed in a private collection.
"A lot of these collectors, they come and say the same thing: 'Why is this out in the public? Why don't you just take the money and have a collector restore it the way it should be restored and have it in his private collection?' Well, nobody would ever see it," said Peterson, whose position also was eliminated in the cutbacks. 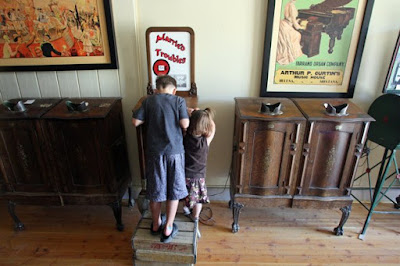 Posted by Phantasmagoria Photography at 9:01 PM No comments: