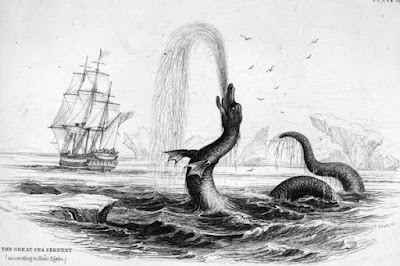 From Fortean Times Magazine By David Clarke
The Ministry of Defence does not keep any secret files on sea monsters reported by Royal Navy personnel, but crews of ships and submarines who make unusual sightings can record their experiences in official logbooks that are public records. This emerged as a result of a Freedom of Inform­ation request made to the MoD by marine bio­logist Sebastian Darby in February. Darby’s request asked the MoD if there were “any abnorm­ally large, or dangerous sea monsters hundreds of metres under the sea that haven’t been revealed to the public”. If such creatures did exist, he argued, it would be in the public interest to publish the facts as marine bio­logists’ lives could be at risk.
Navy FOI officer Heather Godfrey’s response admitted neither the Navy nor the MoD maintained “any form of central repository of information purely devoted to sea monsters”. Although there was no formal requirement, the Navy did encourage personnel to record sightings of marine mammals “and it’s possible this could include unusual sightings”. All such reports were sent to the UK Hydrographic Office in Somer­set, while individual ship’s logs are retained until they are deposited at The National Archives after 30 years. But a search of thousands of ship’s logs for entries on sea monster sightings would exceed the cost limits allowed for a FOI request.
Nautical folklore is replete with such stories and first-hand accounts of sightings have been recorded in Atlantic waters since the Middle Ages. In more recent centuries, one of the most cele­brated sea serpent reports was made by the captain and officers of the frigate HMS Daedalus off the Cape of Good Hope in the South Atlantic on 6 August 1848 (see 'The Golden Age of Sea Serpents'). On arrival in England, the captain, Peter M’Quhae, sent details to the Admiralty and to The Times. He supervised a detailed drawing of the 60ft-long creature that was visible for 20 minutes. But his story was rejected by palæonto­logist Professor Richard Owen, who insisted the crew had seen a giant seal.
A number of other 19th-century accounts have emerged in British Admiralty files deposited at The National Archives in Kew. One contains an account of a sea serpent written by Captain James Stockdale in May 1830. Stockdale and the crew of the barque Rob Roy were near the island of St Helena when they heard a scuffling noise in the water. As they turned to the port bow, they were amazed to see the head of “a great thundering sea snake” whose head rose six feet out of the water “as square with our topsail [and] his tail was square with the foremast”. Stockdale said his ship was 171ft long with the foremast 42ft from the stern, which would make the monster 129ft long. He reported to his masters in London: “If I had not seen it I could not have believed it but there was no mistake or doubt of its length – for the brute was so close I could even smell his nasty fishy smell.”
A Board of Trade file from 1857 contains an account from Comm­ander George Henry Harring­ton of the 1,063-ton merchant ship Cast­ilan, again near the same South Atlantic island. On 13 December of that year, he and two officers saw “a huge marine animal” which suddenly reared out of the water just 20ft from the ship. For a few moments, its long neck and dark head, shaped “like a long buoy” and covered with white spots, were clearly visible “with a kind of scroll or ruff encircling it”. The creature was submerged for a moment and then reappeared, leaving the crew in no doubt they were watching a sea monster “of extraordinary length [which] appeared to be moving slowly towards the land”. The boatswain, who watched it for some time, said that it was more than double the length of the ship, which made it 500ft long.
Both reports appear to have been filed away without comment by the Admiralty, in much the same way that the Air Ministry dealt with reports of flying sauc­ers and UFOs from RAF crews during the 20th century. Unless a clear threat was identified, either from sea monsters or aliens, unusual sightings like these were classified as interesting but of “no defence significance”.
[PA] D.Telegraph, 16 May 2010; Rickard & Michell: “The Rough Guide to Unexplained Phenomena”, 2007
Posted by Phantasmagoria Photography at 7:10 PM 1 comment:

The Most Haunted House in the Midwest, McPike Mansion, Alton IL 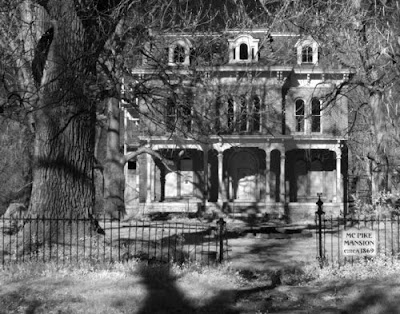 The in sits atop a hill surrounded by large gnarled oak trees, giving the derelict house a foreboding sinister feel. When I arrived one early morning I was taken aback by its presence. The house seems to be sitting, brooding over its former glory. It has the look and feel of every image a haunted mansion should be: iron fence around the property, broken windows, a graveyard in the back, and plenty of ghosts. No wonder McPike has been given the unique distinction of being one of the most haunted houses in the , if not the country.


Built in 1869 by architect Lucas Pfeiffenberger for Henry Guest McPike and his family, the house was built in the Italianate-Victorian style, featuring 16 rooms, 11 marble fireplaces, beautifully carved stairway banisters and a vaulted wine cellar. Many of the wonderful architectural features vanished when it sat abandoned for years. The only hint to its golden years is an intricate carved trim that still borders the ceiling in one of the front rooms.


Originally on a country estate of fifteen acres of land called , the mansion was the perfect place for Henry McPike to practice his love of horticulture. Trees, shrubs, orchards, flowers and extensive vineyards made the home one of the most beautiful in the area. During his time at the mansion Henry McPike perfected his McPike Grape, which became well-known all over the country. Some of the vineyards still exist today. McPike and his family lived in the house until 1936.


Paul A. Laichinger, purchased the house around that time and owned it until his death. It's unclear whether Laichinger lived in the house or rented it out to tenants. The house became abandoned and has remained that way since.


In 1994, Sharyn and George Luedke purchased the house during an auction. Their dream has been to restore the mansion to its former glory and turn it into a Bed and Breakfast. With extensive repairs and upkeep the restoration has been long and expensive. To help finance the restoration the Luedke's hold regular ghost tours and overnight campouts in the front yard.


When the Luedke's first purchased the mansion they never imagined that the place was haunted. Six weeks after purchasing the house Sharyn was tending plants in the front yard and looked up to see a man standing in the window looking back at her. The man disappeared but she noticed he was wearing a striped shirt and a tie. After researching the history of the building, Sharyn came across a photograph of Paul Laichinger wearing the same outfit.


Visitors have seen figures throughout the house. Many have had the sensation of being touched yet no one else is there. Sounds of footsteps are heard pacing up and down hallways and down the staircases. Objects vanish only to materialize in other odd places of the house. 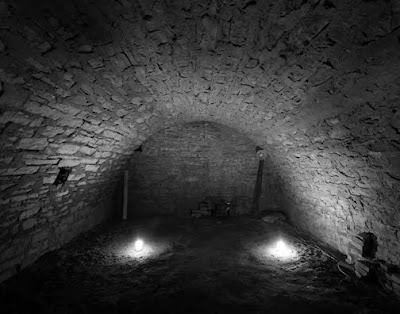 The wine cellar is the most active place in the mansion, where footsteps and voices are heard. Several times a strange mist has materialized from nowhere and follows visitors around to the many rooms in the basement. The large heavy metal door that leads into the basement opens and closes by itself as it scrapes across the floor. Many people think that Henry McPike, members of his family, former owner Paul Laichinger, and a domestic servant haunt the mansion.


The Luedkes' love for the mansion shows by how much attention they give to investigating and learning about the history of the house. They have welcomed visitors from all over the country and are eager to share what they have learned with those who are brave enough to venture inside. 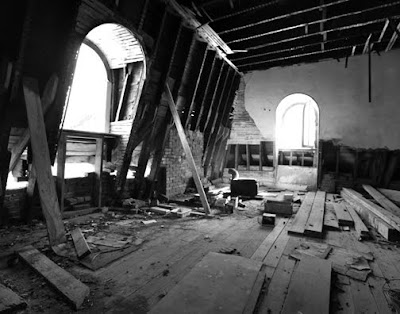 On my visit, Sharyn Luedke walked with me talking about the history of the mansion and the many strange events that have happened, while a black cat followed us around adding to the mystique. As I walked through the abandoned mansion, I noticed the wooden slats exposed from the fallen plaster. Many areas are too dangerous to walk through due to large holes in the floors. A large crack can be seen running from the bottom of the foundation to the roof of the house. Seeing this reminded me of Edgar Allan Poe's classic story "Fall of the House of Usher". 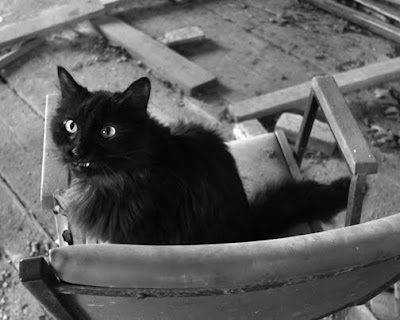 Sharyn told me of again seeing a figure standing in the upper part of the home with the window swung opened to the outside except the windows on that floor only open to the inside of the house.


Outside magnolias from a nearby bush were in bloom, giving the air a sweet scent in contrast to the melancholy atmosphere of the mansion. As we ventured out Sharyn mentioned that an unknown child's grave can still be seen on the grounds. The lid of the exposed vault is broken and has been overgrown by the surrounding vegetation.


Unfortunately I didn't experience anything unusual that day, but my wife and I would love to return and hopefully feel and see what the most haunted house in the country has waiting for us. 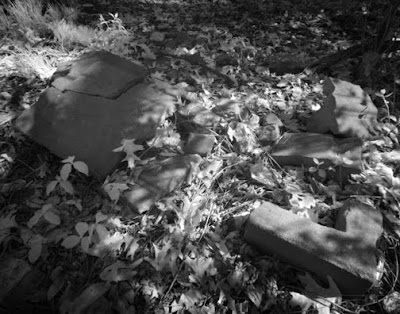