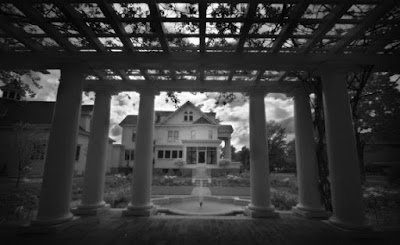 Elegant, sophisticated, refined from all appearances. The hallmarks of a beautifully restored and maintained turn-of-the-century mansion. Dark, brooding, and haunted upon closer inspection.

Built in 1900 to 1901 in the Classical Revival style designed by the Milwaukee architects Henry Van Ryn and Gerrit de Gelleke, the Yawkey Mansion of Wausau, WI, features large columns and a pedimented portico, 16 rooms and 7 fireplaces. Stained glass windows illuminate the staircase. Eight years after the house was built owners Cyrus and his wife AliceYawkey hired George W. Maher to remodel the first floor and add a two- story addition with a sun porch to the east side of the house.
Originally from Michigan, the Yawkeys moved to northern Wisconsin in 1889 when Cyrus joined with his uncle and a business partner from the Yawkey and Lee Lumber Company. A town was founded by the venture and Alice Yawkey named it Hazelhurst due to the abundance of hazelnut trees in the area. Ten years later, in 1899, the Yawkeys moved to Wausau where Cyrus was the uncontested leader of the Wausau Group. The Wausau Group was composed of wealthy lumbermen who pooled their resources in hopes of improving Wausau's economy as the logging industry was dying in the area. After Cyrus’s death in 1943, Alice continued living in the house until her own death in 1953. Their only child, Leigh Yawkey Woodson, and her daughters presented the house to the Marathon County Historical Society in 1954. 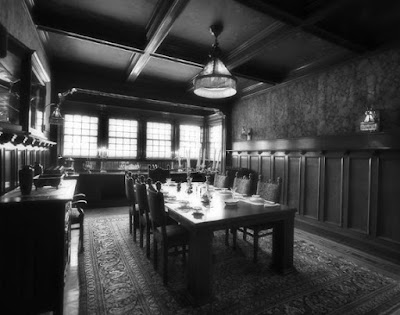 Cyrus Yawkey is believed to continue walking the halls of his beloved mansion. Phantom footsteps can be heard in the upstairs hallway and descending the main staircase. Strange odors have been reported in an upstairs room along with the smell of pipe tobacco in the first floor staircase landing. Staff has reported the sound of a telephone ringing in a room that has no phone. A book of poetry has been known to be moved from one exhibit to another by unseen hands. The door alarm often sounds by itself. A member of the staff has heard Mr. Yawkey’s name being called. Alone in the museum at the time, the frightened staffer tried to exit through the basement door and found it to be held shut. Employees on a lunch break in the kitchen once witnessed a soda bottle cap move across a table before falling to the floor.
Posted by Phantasmagoria Photography at 10:52 AM